SELECTION FOR A LADY - FRIEZE 2021: Wooden Figure of a Man 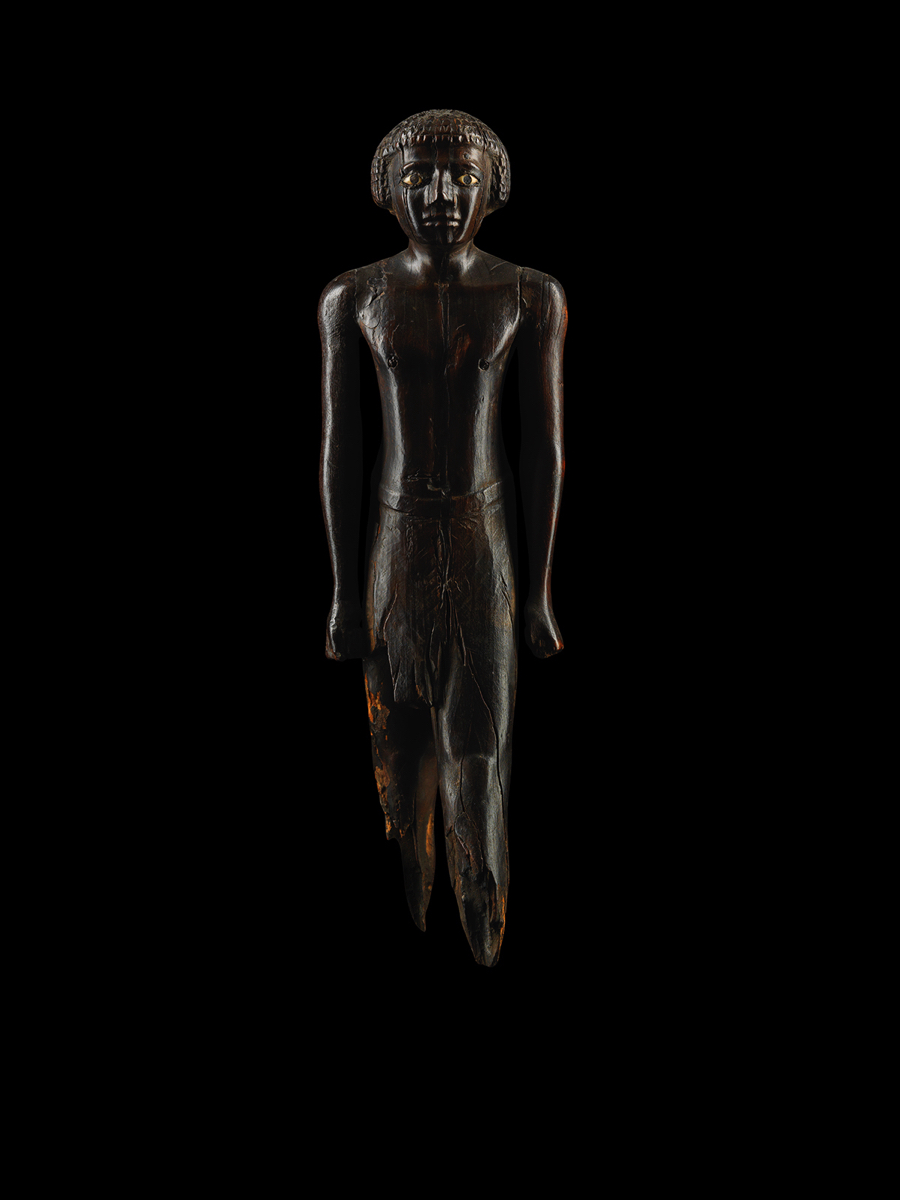 This exceptional wooden statue of a man is an exquisite example of the skill with which Egyptian sculptors executed their works. It is constructed from different elements, with the face and both arms being worked separately from the body. In the forehead a dowel is visible, used to connect the facial mask to the rest of the head. Originally, the figure would have been covered in a very thin layer of plaster stucco and brightly painted.

The slender figure is shown in a strong vertical pose, with his back straight and head held high. The short round wig the man is wearing, leaves his earlobes visible. The most striking feature of the delicately carved face are the carefully detailed eyes. Within a contour of bronze, the original bone inlay is preserved. Round pupils have been added in black paint. Both arms are held alongside the torso, the hands balled in fists. The right hand turns slightly outwards and is perforated to hold an attribute which is now missing. A short kilt or ‘shenti’ is fastened around the man's waist with a belt.

The forward motion of the left leg creates a sense of movement, this virtual movement is typical for ancient Egyptian wood figures and aims to create a sense of liveliness in order to allow the deceased to retain the functionality of his body.

Figures of this type were commonly included among the grave goods of aristocratic tombs. Their presence there was connected to the ancient Egyptian concept of the ‘ka’. The term is usually translated as “spirit” or “double”, yet the all-encompassing meaning of the concept still eludes us. The ‘ka’ was an entity which secured the physical and mental activities of man. It could designate human individuality as a whole, referring to character, nature and disposition.

Although the Egyptians desired their sculptures to be preserved for eternity, as these housed the spirits of gods and deceased ancestors, they considered wood to be an appropriate material to carve statuary and became highly skilled at sculpting. Each material used for sculpting had a particular meaning. Wood in general was sacred to the mother goddesses Nut, Hathor and Isis, who were often depicted as trees providing shade and sustenance for the deceased. In addition, wood sculpture was able to convey the idea of movement and was therefore commonly used for striding figures. Native species such the acacia, sycamore fig and tamarisk were often poor in quality, but carpenters developed a range of ever-improving techniques in order to make the most of the wood they had at their disposal. Imported varieties such as cedar and ebony were confined to temples and tombs of the pharaoh and highest officials due to their valuable nature.